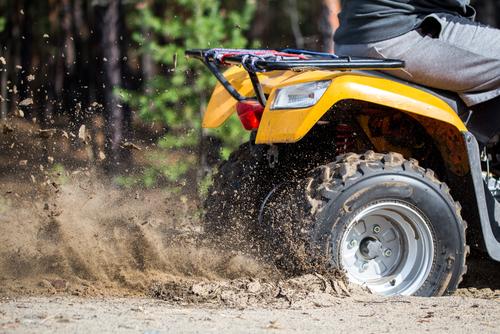 Having toys such as ATV’s is suppose to be fun, so make sure to contact Desert Mountain Insurance to obtain guidance when purchasing, renting or allowing someone to use them on your property. Please read the informative article below and review our Recreational vehicles page for more information. If you have any questions, please call us at 866-467-3627 or submit a contact form or request for Quote.

A property owner who owns a 70-acre farm was asked to allow friends with ATV’s to access the property for offroad
riding. He was concerned about the liability associated with this permission should he consent. Does his
insurance protect him? Is there anything else he can do?

In the field of risk management, there are several methods of handling risk. One of those is called “avoidance.” It’s like the old joke where the patient tells his doctor, “Doc, it hurts when I do this.” The doctor replies, “Well, don’t do that.” In the scenario described above, the best risk decision is to not give permission for the use of ATV’s on property you own. Jim Mahurin, CPCU, ARM is a Nashville, Tennessee based risk management and insurance consultant who has seen “friendly” situations such as this escalate into extraordinary liability claims once a serious injury transpires.

“Let me suggest caution in regard to the ATV question. I have dealt with situations involving ATV’s and property owners for almost twenty years. Almost all of them were bad. Really bad.

“One project was to perform a risk assessment for a private community following a catastrophic ATV mishap.
They owned several thousand mountainous acres surrounding a lake and housing area. ATV use had been very
popular in the community. The tragedy was quite an education for everyone, the seriousness of the situation
accentuated somewhat by the payment of several hundred thousand dollars not covered by insurance.

“ATV operation is dangerous. A sizable number of mostly young people are killed on these machines every year.
A far larger number suffer catastrophic injury. The injury profile arising from ATV use includes a high incidence of
debilitating intracranial and cervical trauma. If the riders wears helmets, the injury patterns are more upper and
lower cervical, with a reduced incidence of intracranial trauma. The secondary traumatic pattern tends toward legs
and pelvis areas. A not uncommon problem is brain embolism. Both primary and secondary traumatic injury
patterns frequently result in permanent disability or death.

“ATV operators are usually young, and the costs associated with fatalities often pale in comparison to the
expense of caring for a permanently and totally disabled youth. As you pose the question about reducing or
transferring liability, let me suggest you assume the situation from which you have to defend yourself is a
quadriplegic or catastrophic brain injured youth facing fifty years of nursing home confinement. This is more
common than you think and juries are quite sympathetic.

“The ATV industry reached an agreement with the U.S. Department of Justice several years ago. The industry
agreed to take the three-wheeled ATV’s off the market and develop safety standards for the use of the fourwheeled
models. The industry has also worked to develop some procedures for the operation of ATV’s on private
land and address the issue of liability. The industry materials are usually available from ATV dealers. I found them
to be excellent.

“The issues of liability are complicated. Since each state has differing laws with regard to negligence, the
involvement of an attorney is very important. A separate problem with ATV operation is the uninvited user. If an
area is used by one party, other ATV riders may show up uninvited and use the site as if it were public property.
This creates a different set of problems.

“With regard to insurance, if the owner makes the unfortunate decision to allow ATV riders to use his property, it is
important to make sure they have insurance coverage and to provide evidence. You want to trigger contractual
coverage of the party using the property, even though that is likely to be of little comfort to you when you are sued
for an injury or death described above.

“One final comment…ATV’s often cause severe erosion and soil compaction problems. The farmer in question
needs to watch the impact of the ATV’s on his land very closely. He may find portions of his land compacted and
suitable for paving in a remarkably short period of time.”

If the insured insists that he wants to do this, then he should be very aware that the situation could (“probably”
might be a better word) come back to “haunt” him (no pun intended…this really could get serious). If so, he would
certainly want a hold harmless agreement signed by the ATV owners, though that wouldn’t protect him from
possible third-party actions that have been recognized in some legal jurisdictions. These can arise from non-riders
who are injured or unknown persons who the ATV owners allow to ride their vehicles. In addition, it’s unlikely that
such a waiver of liability would be enforceable if the signer is a minor.

In addition, the landowner would want evidence that the ATV owners/riders have insurance. In general, if they
have homeowners coverage, it will not protect them or persons they injure while using an owned ATV off their
own premises. Special recreational vehicle policies are usually necessary and they should be written with VERY
high limits of liability, and most likely in conjunction with a personal umbrella policy with at least $2 million limits.
This scenario is a great illustration of Risk Management 101. IF the landowner is insistent upon allowing this
activity to take place on his property, he’d certainly want to make sure that proper coverage and high limits are in
place…is he willing to pay for this to maintain these friendships? Perhaps his excuse for not allowing this would be
to just show these folks how much this is going to cost him in increased insurance premiums. And, if they offer to
reimburse him, let him know that, with such remuneration, he may now have a “business” exposure not covered
by his policy.

Here are some web sites with info about ATV’s and accident statistics: