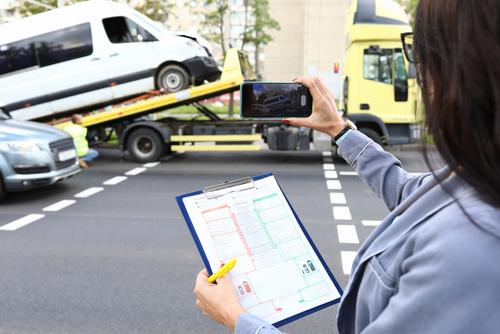 Due to the complexity and uncertainty of coverage for your vehicle’s diminished value, contact your agent to review your personal auto policy.

When a car is damaged in an accident, then repaired, the resale value may be less than that for a comparable car that has not been damaged. In other words, the damage results in a reduction, or “diminution,” in the resale value of the auto. An insured’s claim for this reduction in value may be made against a third party that negligently caused the damage to the insured’s auto, or it may arise from a first-party claim against the insured’s own physical damage coverage.

With regard to first-party claims, while it is perhaps arguable, the ISO Personal Auto Policy contract language appears to cover only the actual cash value of the damage or the actual cost to repair the damage. It does not appear to contractually cover any reduction in market value even if the insured was able to prove such. Third-party claims for “diminution of value,” on the other hand, have generally been found by the courts to be covered by auto insurance. The Liability Coverage section of the Personal Auto Policy pays for any property damage for which the insured is legally responsible. Such legal liability may be established by case law or it may be statutory.

According to our research, most courts have recognized diminution of value as being legally compensable to the extent that the plaintiff can demonstrate such reduction in market value. Also, most case law seems to have held that, in first-party claims, the contract governs.

“An aggrieved consumer may be able to plead, prove and obtain favorable jury findings establishing both costs to repair and permanent reduction in market value notwithstanding such repairs, as cumulative rather than mutually exclusive measures of damages.

“An award of diminished value is recoverable in addition to the costs of repair, assuming that the permanent reduction in value refers to that reduction occurring even after repairs are made.”

In Northwestern Nat. Ins. Co. v. Cope, 48 S.W.2d 717 (Tex. Civ. App. 1969), the court stated: “Three months after purchase of new car, insured Cope was involved in accident. Cope contended that after repairs to her auto, its value would be $1,440 less than prior to the accident.

“Thus, she argued that the measure of her recovery should be the difference in the reasonable cash market value of the auto immediately before and after accident, and should not be tested by reasonable cost of repair. “Held, such measure of damages is proper.”

In summary, there appears to be nothing in the ISO standard Personal Auto Policy (PAP) that requires the carrier to compensate the insured for diminution of value in physical damage claims…in fact, the contract seems to support the position that such consequential loss is not covered. In contrast, there is ample case law to demonstrate that such diminution of value is legally recoverable from a third party and, thus, covered under the liability section of the auto policy. Note: Some insurance companies may be using a relatively new endorsement called the Coverage for Damage to Your Auto Exclusion Endorsement, which is not yet approved in all states (in fact, some states have specifically disapproved this form). The endorsement clarifies that diminution of value claims are NOT covered by the PAP. If your policy has such an endorsement, then you can be assured that diminution claims are not covered by your policy.

Please contact Desert Mountain Insurance if you have any questions about your auto insurance coverage.

Copyright 2000 by the Independent Insurance Agents & Brokers of America, Inc. Reprinted with permission. NOTE: Policy coverages and circumstances can change at any time, so the information above may not be accurate at the time of reprinting or subsequently to that time. IIABA does not assume and has no responsibility for liability or damage which may result from the use of any of this information. The most current, up to date version of this article can be found at IIABA’s Virtual University at http://vu.iiaa.net.