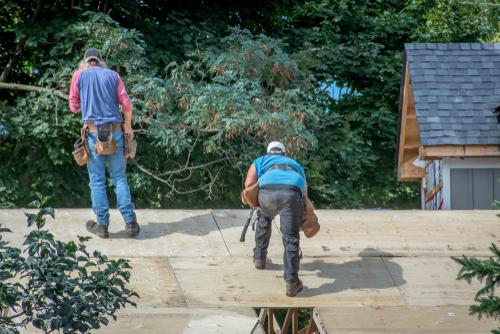 Consequential damage is the loss, damage or injury sustained as a result or consequence of a covered loss. An examples of consequential damages in a homeowners policy would be, as indicated below, replacing the shingles of the entire roof when only a section was damaged. As for a business insurance policy, an example of consequential damage would be loss of rent when a building experiences a loss and cannot be occupied. Contact our insurance professionals at the time of loss or to discuss the coverage under your existing policy.

Here’s the scenario: Windstorm and/or hail has damaged shingles on the roof of your home. Since the roof is over
15 years old, replacing selected shingles with new ones will make the roof unsightly. So, of course, you want the
entire roof replaced. The insurance company refuses, saying their only contractual obligation is to replace the
damaged shingles. How does your homeowners policy respond?
According to the “ISO standard” homeowners forms, “We insured against risk of direct loss to property described
in Coverages A and B only if that loss is a physical loss to property.” In other words, the homeowners policy says
it only covers DIRECT damage. It is understandable that an insured doesn’t want a few new shingles on an old
roof…it would look bad. However, the policy doesn’t cover the consequential loss/expense of replacing the entire
roof since the remaining shingles have not been damaged by other than normal wear and tear which is excluded
elsewhere in the policy.
However, it does seem that there is a movement to cover some of these losses. One argument we’ve seen is the
Pair & Set clause in the policy…looking at the entire “set” of shingles as a whole, this valuation provision says you
have to pay the difference between the value of the set before and after the loss. However, we believe that this is
a pretty weak argument, despite an October 2000 lower court case in Minnesota that found coverage. Courts
have been divided on this issue, though there appear to be more courts siding with the opinion that there is no
coverage…whether there is coverage or not may depend on precedent-setting court cases in your state.
In some states, statutes may govern how such losses are adjusted. For example, Florida statute 4-166.028 says,
“[R]eplacement of the damaged portion of a roof which has faded does not require replacement of the entire
roof….”
The Pair or Set clause is an interesting approach and quite possibly a valid one in some jurisdictions. One
problem, though, is the valuation used in this clause. Valuation under the homeowners policy for building
“damage” is usually replacement cost. However, the Pair or Set clause says:
“Loss to a Pair or Set. In case of loss to a pair or set we may elect to:
a. Repair or replace any part to restore the pair or set to its value before the loss; or
b. Pay the difference between actual cash value of the property before and after the loss.”
Since the valuation basis for this clause is “actual cash value” (replacement cost minus depreciation for wear and
tear, weathering, etc.), it does not appear to support the full replacement cost of roof shingles.
Where only a few shingles are involved, some adjusters (citing the “repair” condition of the policy) argue that
shingles from a less visible area of the roof can be moved to replace damaged shingles in a more visible area.
Finally, in most policies, there is a specific exclusion for “wear and tear,” which is the actual “damage” to the
shingles not harmed by hail.
As you can see, unless there are court cases in your state at the Appeals or Supreme Court level that support
replacement of the entire roof if only a few shingles have been damaged, there is a strong contractual argument
that such consequential damage is not covered by the standard homeowners policy.